After jamming contact lenses into my piggy sleep-filled eyes and downing a small strong coffee, at 5.45am I slipped out of the house under the cover of darkness.  I congratulated myself many times over the following 15 hours for having the foresight to put in contact lenses, for reasons I will explain further on.  In my younger days I wore contact lenses for vanity, nowadays I only ever wear them on long hill walks for ‘life-preserving’ reasons – yesterday I don’t think I would have got through the walk, without some kind of injury at least, if I hadn’t been wearing them.

It was a little cold as I made my way down the drive – certainly colder than the last time I had set off early for a walk back in January, but it was thankfully dry.  As I approached the main road, the flashing hulk of a snow plough rushed past.  How strange, I thought, for there was no snow about and I didn’t think any had been forecast.  But by the time I was half way up the first part of the forestry track and turned back to look over the twinkling lights of Kirkconnel, it was then that I noticed that all the hills on the north side of the River Nith were completely snow-covered.  And at that moment the snow began to fall on me…and it didn’t stop for over 12 hours. 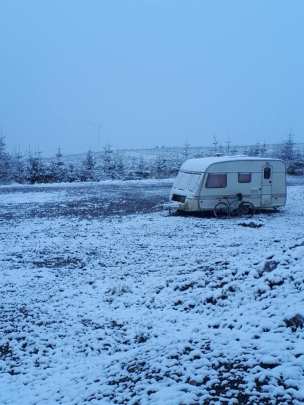 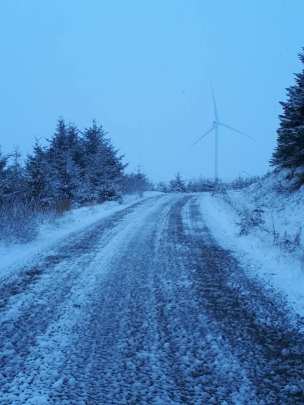 I had a couple of objectives for this walk.  The first was to reach the Polskeoch/Chalk Memorial Bothy and make a start on a big mural which I have been planning for the last 3 months.  Then, as the first layer of paint was drying, I wanted to trek up to one of the Andy Goldsworthy Striding Arches on Benbrack.  The last time I was up on those hills in January I visited the arch on Colt Hill, under a bright blue sunny sky which stayed with me the entire day.  Yesterday – in April – was just about as much of a contrast as you can get.

I reached the bothy at exactly 9am – my personal best and a full 45 minutes quicker than last time.  I should add that I did have my bike with me which I kind of regretted bringing when the snow first started, but I quickly realised how much easier it is to cycle up inclines when there is an inch-deep layer of snow.  Maybe it’s something to do with having extra grip.  I don’t know, but it was a surprising and very welcome realisation and by constantly moving, I didn’t have a chance to feel cold.

Just as I was 5 minutes into the mural in the bothy, suddenly the door swung open and in came two police officers.  Now remember – this bothy is in the middle of a massive forest up in the hills so it really was a surprising sight in such a location.  ‘Are you Rachel?’, they ask.  I informed them that I wasn’t and then I babbled on about how I was painting a mural and that I did have permission from the forest rangers to do so.  I felt like a kid tagging a wall and getting busted by the police and it brought back memories from my dim and distant past.  It turned out that Rachel had been wandering out in the hills for the last 3 days and they were concerned about her.  This of course worried me greatly and I assured the two officers that I would keep an eye out for her.

Half an hour after the police left, a woman, who of course turned out to be Rachel, came blustering into the bothy.  I think she was relived to see a fire going, and perhaps relived to see that I was also a woman.  The conversation between us flowed quickly as I continued painting and listened to stories about her amazing adventures.  She made my little hill missions seem like a wee stroll in the park!

By 11.30am I had finished the first coat of blue paint so I bid Rachel farewell and set off up along the track which forms part of the Southern Upland Way.  The paint was supposed to dry in 4 hours but I had a sense that it might take longer in a cold bothy.  I figured that if I aimed to get back there between 3 or 4pm then I’d give myself an hour or so to paint the next part of the mural before heading home. 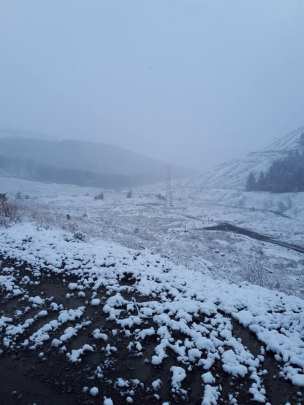 The snowfall slowed down a little as I made my way up around the curve of the hill, looking back down over the the beautiful sight of the bothy, nestled in the surrounding snow-covered forest like something from a fairy tale. A playful fox skipped back and forth across the track a few yards in front of me, just at a point where I was beginning to feel a little tired, so seeing that spurred me on a bit.  I’d left my bike back at the bothy so it was just shank’s pony for the next few hours.  I estimated that it would take about an hour to reach the first signpost for the arches, close to the foot of Colt Hill, and in fact, it took me exactly 59 minutes.  Which made me smile.

Now is the point where things began to get difficult.  To reach Benbrack (581m) I needed to ascend and descend two other hills beforehand – Cairn Hill (543m) and Mid Hill (562m).  The snow was at it’s most intense so far at this point and the path was truly hidden.  Suddenly it was not so much a fairy tale anymore, more an arctic trek.  Thankfully the three tree-less hills lay out before me like the humps of a great white dragon, stretched across the land so, despite the poor visability, there was no chance of getting lost as long as I just kept heading forwards, face on to the wind and horizontal snow.  It was at this point where I felt so thankful to be wearing my contact lenses – glasses would have rendered me completely blinded by now and it would have been a very horrible experience.  Each footstep felt like the equivalent of 5, with the uneven, snow covered hill sides providing lots of stumbling opportunities, and the gusty icy wind pushing me backwards. 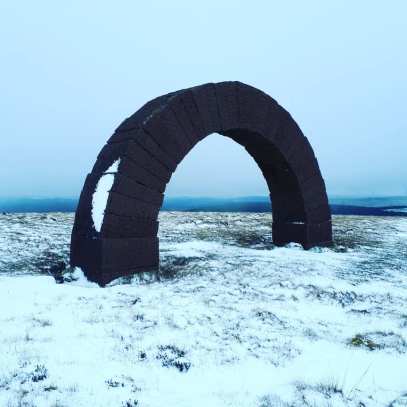 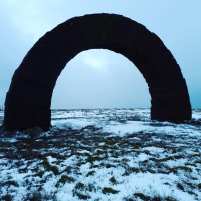 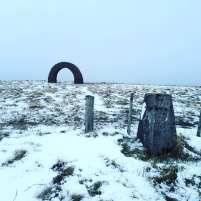 Approaching the summit of Benbrack and seeing the arch up ahead of course made the whole arduous journey worthwhile.  I had managed to achieve my goal, even in adversity.  The cold conditions had sucked away most of my phone battery – the remaining 11% allowed me to take 5 photos before it unceremoniously died on me which left me having no idea of the time from that point on.  I had been hoping and praying for a miracle that at the exact point I reached the arch, the snow would cease to fall and the sun would come out.  I felt by that point that I deserved it, but instead the snowfall just became heavier and heavier with every step as I retraced my steps back.

I have no idea what time I arrived back at the bothy but I knew I had been gone a lot longer than I had originally planned – and the paint still wasn’t dry.  And neither was I.  Every square inch of my body was wet and cold and as I sat and chatted to Rachel (who was still there, wrapped in a sleeping bag on the sofa) about our life stories, my whole body shivered.  I wanted to be at home more than anything in the world and all I could think about was having a scolding hot shower and seeing my people and animals.

It’s safe to say that the next few hours were pretty awful, although by the time total darkness fell, the snow finally stopped.  As what seems to happen on most of my walks, just at the point I felt I really couldn’t keep going, a beautiful skippity-hoppity deer ran right in front of me which made me smile and lifted my spirits.  If I was Snow White it would have probably let me ride on its back all the way home, but alas.

I’m kind of ashamed to say that I wimped out at the final hurdle.  When I reached the main road – less than 10 minutes down from home – I just couldn’t face that treacherous road side journey, so in a slightly delirious state, I unintentionally woke up my neighbours at the Guildhall Bridge Pet’s Hotel who very kindly gave me a lift up the hill.  Thanks so much Rob!

It was just after 10pm when I finally returned home, over 16 hours since I set off and I don’t think I have ever been so grateful to be anywhere in my life.  The relief to be out of my wet clothes, drinking tea and talking to my other half is a feeling I want to hold on to forever.  I am so lucky to be able to have all these exciting wild adventures, but I am even luckier to have so much to return to at the end of them.

One thought on “A 36 mile Arctic Adventure in South-west Scotland.”

This site uses Akismet to reduce spam. Learn how your comment data is processed.